I'm talking about my oldest son and you can't really spend a day with him unless I already know you and you are offering free baby sitting. But, trust me, he is hilarious.

Griffin is not quite three and I'll be amazed if he makes it to elementary school without breaking a bone. I've mentioned several times that he runs around a lot. My brother says that he just runs until he hits something and that seems to be a pretty good assessment.

I have entered rooms to find him on top of our pool table, hiding in the back of my closet, under the dining room table, under a pile of bedding creating a small giggling lump, and standing in his window sill hiding behind the blinds.

This week he used an entire roll of scotch tape to create "reins" for a pair of horses (2 bar stools) that he was using to pull his carriage (kitchen chair). He uses a set of plastic keys to "start" his rocking moose (exactly like a rocking horse, but 50 bucks cheaper). He pretends to put on his fire hat, goggles, jacket, and helmet every time we get into our mini-van/fire engine. 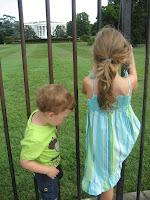 This is Griffin attempting to squeeze through the bars onto the White House lawn while encouraging his sister to do the same thing. He has very little respect for rules he does not understand. Which is most of them. 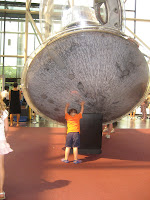 This is Griffin attempting to push over the command module from Apollo 11 at the National Air and Space Museum. He seems to think that he can do things like this.

Here's the funniest thing that he has said lately:

I've heard it called a lot of things, but a magical wind that comes from your behind is a first.

I love this kid. He yelled yee-haw when he saw videos of paratroopers invading on D-Day. He offers to fight bad guys he hears about from books/tv/adult conversations. He would love to be an astronaut/cowboy/fireman/football player. He also really loves to dance. I cannot wait to see what he becomes....unless he's in jail. That's always a possibility.
Posted by Best Mom at 1:48 PM
Email ThisBlogThis!Share to TwitterShare to FacebookShare to Pinterest