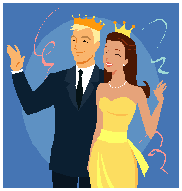 European kings used to refer to themselves in the third person and as though they were, in fact, more than one person.  They called this quirk the "royal we."  For instance, "WE are not pleased that you looked at our wife the wrong way and now you will be beheaded.  WE are going to lunch."

The idea was that they were the embodiment of the state and, as such, represented the entirety of the nation they ruled.  That divine right of kings concept must have been pretty heady stuff if you happened to be born into the right family.  Louis XIV of France went so far as to have the courtiers at Versailles face him in the chapel while he faced the altar.  They worshiped the self-titled Sun King while he worshiped God on their behalf.

But you (and I) are not royal.  WE are parents and partners and owners of minivans.  WE are also guilty of poor speech patterns.  You probably began using what I like to call the couple WE sometime after your marriage if not before.  WE had such a great time in Barbados-WE hardly even noticed the jelly fish stings!  Or WE just love the new Biggest Loser-WE think the ex-football player will win.

This kind of WE is totally appropriate if your spouse is standing next to you and is mute.  Otherwise, it is just annoying to the people around you.  I first became aware of my use of the couple WE while talking to single friends at work.  Did I really need to say WE started a new diet and WE are having a hard time with it?  Why couldn't I just start talking about my own point of view and leave my interpretations of Jay's thoughts in my head?

Unfortunately, it gets worse when you add parenthood.  WE are working on the letter C this week.  WE are potty training at our house.  WE are a little overtired.  Really? Because you are 35 years old and if you are uncertain about the sounds the letter C makes or where to correctly place your bowel movements I think our association is just about over.

I know I'm guilty of too many WEs, but I'm drawing the line at this one: WE are not pregnant.  I am pregnant.  Really. I am pregnant. With our fourth kid.  I'm sure there will be more about that later.  Until then, WE are not barfing up our really yummy looking smoothie.  WE are not feeling the waistband of our jeans dig into our belly ALREADY because, honestly, how loose must those stomach ligaments be now on this fourth go-round?  WE are not dreading being enormously pregnant in July in Atlanta.  Again.

I will grant that WE are probably both terrified at being outnumbered two to one.  But I don't know for sure because Jay doesn't usually have any visible emotions.  Which I like, by the way.  It allows me to be the whiny/crazy one without interruption.

WE are having a baby.  WE will never sleep again.  WE will spend more time at the doctor/dentist/soccer field than WE ever will in Paris.  But WE are not bloated and grumpy.  Or if WE are, I don't want to know about it.
Posted by Best Mom at 8:26 PM
Email ThisBlogThis!Share to TwitterShare to FacebookShare to Pinterest