The Most American Week Ever 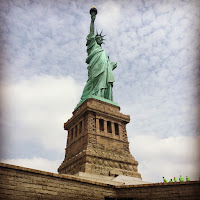 It's been a rough week for America and if you don't know why, you need to read this more than most. Or, if not this, then almost anything other than your heavily curated Facebook feed. But I'll assume that you do know why, and that you, too, are hurt and angry and disoriented by the violence and pain in our nation over the last several days...or decades...or centuries, depending on your point of view.

I'll assume that, like me, you want a better America than the one you've seen on television or out your window, or through your own experiences. I'm going to, for the sake of this one-sided discussion, begin with the assumption that you are both proud to be an American and willing to make that mean something greater than it already does. It's a decently large set of assumptions, but I think we're all up to that challenge.

I've seen and heard multiple versions of the comment, "this isn't my America" or "what is this country coming to?" --not just in reference to this last week, but also during our incredibly weird election cycle and never-ending spate of mass shootings. But I actually think this week may be the most American week we've had in a long time.

The major news stories of this week have involved police shootings of minorities, a suicidal/homicidal soldier, mental illness, death of police officers, peaceful protest, arrest of protesters, and, as is increasingly common, the proliferation of guns. If we could throw in immigration (although one of the fallen Dallas officers was, in fact, Mexican-American) and a privileged white guy getting away with campus rape we'd probably have the crux of every news story of the last year.

There is chaos and tension and blood. As disturbing as that is, it's not exactly new.  From our violent beginnings in the Revolution to the Civil War that nearly broke America's back...from the gang riots of immigrant groups in New York to the violence of Bloody Kansas...from the Civil Rights Movement to border wars no matter where our border might have been at the time.., the pain and the violence and the continually readjusting to a new normal, a new people group, and a new way of doing our lives has always been present.

It is, in fact, the most amazingly beautiful thing about the American Experiment--that we can face the inevitable clashes that come with living in close proximity to those with whom we do not feel related and find some common ground to stand on anyway.

When I taught AP World History to 10th graders, one of the tasks they needed to learn was to answer Document Based Questions. They were given a set of historic documents and expected to draw conclusions about the time and place in which the document was made. To be honest, most of them were very bad at it, especially at first. They continually wanted to use the documents (ships' logs, photographs of pottery fragments, royal decrees) as they would an encyclopedia.

They wanted to believe what they could see in front of them was absolute fact.

Over time, and with a lot of practice, they learned to always, always look at the source first. Was that ship's log made by a captain for his own use or to hand over to his investors or boss? Was that pottery used by an everyday citizen or was that something only elites had access to? Did the king have the power to enforce that royal command or was it just for show? Who, what, when, where, why, and how--those interrogatives you learned if you ever took a journalism course--became the bedrock of understanding historical events.

In order to accurately assess what happened in any given moment, students had to put themselves in someone else's shoes...to imagine their motivations and experiences...their worldview and sphere of influence..instead of looking at it solely from the students' own points of view. Although not all students became equally proficient at this task, every single kid I ever taught about sourcing a document got better at it over time. Every single one. Every single time.

I wish I could lead courses for adults to teach this skill (because it is absolutely a skill) and use current news articles as our documents. There are kind, well-meaning people who are completely clueless when it comes to thinking about life outside of themselves. And our social media obsessed society makes it so much easier to look like an insensitive moron. These social issues--race relations, policing, mental illness--they don't lend themselves to 140 characters or a snap shot.

I understand the desire to say something, anything, when there is pain...but your Insta-ready white family's pic at the beach in Seaside stating that you "stand with your African-American brothers and sisters" doesn't hit quite the right note. Find some actual humans with brown skin to stand next to when they need a friend, not when you need a "black friend."

If you commented that "perhaps some good will come from this" after the assassination of police officers, you clearly aren't related to any cops. Only victims, of any race, of any crime, of any profession, get to look for the silver lining. Bystanders should bring blankets and water and hugs and only say, "I'm sorry."

If, every time there's a mass shooting, you post that the problem isn't with guns, but crazy people with guns and we really just need to "fix" our mental health system, you just prove that you don't know anything about mental illness. I know about both guns and mental illness and only one of those things can be locked up in a safe.

If you post passive-aggressive messages about the "sanctity of the family" even if you don't ever actually say anything about gay people, your gay friends and relatives read between the lines even if you really didn't "mean it that way." Stop that.

If you post that you "support our troops" but don't bother to learn that Memorial Day and Veteran's Day are two different events (neither one of which is about active-duty soldiers), your thanks sounds kind of hollow. Same goes for complaining about your out-of-town husband on Facebook when you have a military spouse as a friend.

Social media is fun and interesting, but it is far more about blips of information than about relationships and understanding.  Your one comment about a complex issue is never all you think and feel about the topic and you know it...let's all try to imagine what it might sound or look like to the people we love who might be listening.  Save the other comments for face-to-face conversations.

If you want meaningful social media, go ahead and follow DeRay and the Dallas PD and the White House and Mitt Romney and It Gets Better and Focus on the Family. If you don't want political social media, that's cool, too. Stick to food and vacay pics and we can all keep following each other and looking at each others' kids.

But in real, actual life, this is my proposal:

Find someone you're afraid of and love on them, without ever expecting anything in return. We owe it to our children to get this right.

Go to a police station and take some food at a random time. Cops work weird hours and they're hungry.

Ask a woman in a head scarf at the gym how her holidays have been. Can you imagine the dedication to fitness it takes to work out with your head covered?

Talk to a gay coworker about their kids. Gay people have kids sometimes and they love theirs just as much as you love yours.

Learn how to both pronounce AND spell the names of your neighbors from India.  It may not sound "American", but that's o.k., you can do it.

Listen when your classmates and coworkers and friends from church with brown skin say you don't have any idea what it's like to be black in America. Because you don't. And I don't. But we can both learn a little bit more every day.

I'm still feeling stupid about the rant I went on about the treatment of the history of enslaved people at Mount Vernon---to African-American friends of Jay's I had never met before. (Uh, if you guys read this...sorry, y'all. My mouth works faster than my brain sometimes. Hope it wasn't weird.)

We're going to have to get over the strangeness and love each other anyway. And listen. And learn. And be generally uncomfortable. It won't kill us, but it might just save us.

I, like a lot of people who like both music with great beats and Revolutionary history (I'm assuming there's more than just me), have been singing the songs from the Broadway musical Hamilton. It's amazing and you should listen to it right after this if you haven't already. There's one song with the refrain, "when are these colonies gonna rise up?" It's about actual, violent rebellion, but the story of Hamilton is also about rising beyond the violence to get to something better. One of Lin-Manuel Miranda's lines (as Alexander Hamilton) is "for the first time I'm thinkin' past tomorrow." It's about achieving freedom and equality and hope and opportunity without burning the house to the ground in the process. It's about change for the present in hope for the future.

Conflict in America is not new. When this many different groups of people live together it will never be "over," merely always evolving. But this IS America--to rise up, rise on, rise through. To forge better and truer, stronger and braver not in spite of, but because of our differences.

So sing along everybody, "when are these colonies gonna rise UP, rise UP?" We can do it together.
Posted by Best Mom at 3:55 PM
Email ThisBlogThis!Share to TwitterShare to FacebookShare to Pinterest