So I mentioned in my last post that we are going to spend 2 years visiting all 50 states. It will probably take us 2 years to get the lower 48 and then two separate, really expensive, trips to hit Alaska and Hawaii. Even knowing from the beginning that we will need to be flexible to achieve our goal, it was awfully surprising that the lesson was learned so very quickly.

We planned our first trip last month to head up to some mid-Atlantic states and see Washington, D.C. Unfortunately, the weather did not agree with us and one of our kids barfed in the hallway on the new carpet the week we were supposed to leave. The recovering barfer and the frost-bite inducing cold forced us to reevaluate our plans.

We decided, days later than we had originally planned, to just head to the Carolinas so that we could at least begin our adventure instead of cancelling altogether. We had no reservations or pre-planning, but since it was February we figured we'd be able to find a decent hotel and packed anyway. We got the car loaded up and all the kids buckled in and then realized we had a flat tire.

So then we went to Discount Tire and got two new tires. The children thought it was awesome, they gave us money back on our two tires still under warranty, and they were done in 30 minutes. Yay, Discount Tire.
Finally, we were on the road and headed to Charleston, South Carolina. Charleston is lovely. There are Spanish moss covered trees and old cobblestone streets and a gas light district that smelled a little too much like natural gas for me to completely relax. We stayed right next to the market that opens every day and were able to walk everywhere we went. Hotels in that area are expensive, but we only stayed two nights so it wasn't too terrible.

Our first day we visited the Old Slave Mart museum, the Old Exchange and Provost, and Fort Sumter. I apparently fall far into the camp of "stark truth-telling parents" because it really didn't occur to me that I might traumatize the children with the history of slavery until someone mentioned it on Facebook. Anyway, we looked at photographs of small children in chains and actual whips and listened to personal stories that have been recorded by actors and it was painful yet enthralling. The children were most interested in the fact that families were broken up as children and parents were sold to different owners.

It was also painful because we have a 2-year-old and he is incapable of somber reflection. I don't have any pictures of this because human beings were sold like animals in that spot and it didn't seem like an appropriate photo-op for small white children.

I don't have Old Exchange photos, either, because that included a guided tour and during guided tours Jay and I spend all of our energy and focus keeping our children from destroying historic artifacts and knocking over strangers. It is like taking a litter of 3-foot-tall tiger cubs everywhere we go. Still, the history lover in me enjoyed both of these locations and I am glad we went.

We spent the afternoon at Fort Sumter, the site of the start of the Civil War. To get to the fort you have to take a 30-minute boat ride, which was a big hit with everyone. There is an indoor area on the boat so even though it was cold we didn't freeze. The fort itself is exactly the kind of place we like to take the kids. It is outside, there is plenty to look at, and it has historical significance. You're only allowed to stay about an hour because the boat will leave you (the park rangers actually rode back with us) so we didn't get to spend much time inside the museum on the actual island. Also, my son may be the only tourist ever to have left his winter gloves on Fort Sumter. He had owned them for one day.

The next morning we visited the market and said "don't touch that" 147 times and "no, you may not buy that" 412 times. The market is interesting for adults and apparently sheer torture for small boys. We also ate an amazingly delicious breakfast at the Dixie Cafe, which was on Diners, Drive-ins, and Dives from the Food Network. You should go there.

From Charleston we took this awesome bridge over to Sullivan's Island to go run around on the beach for a few minutes. 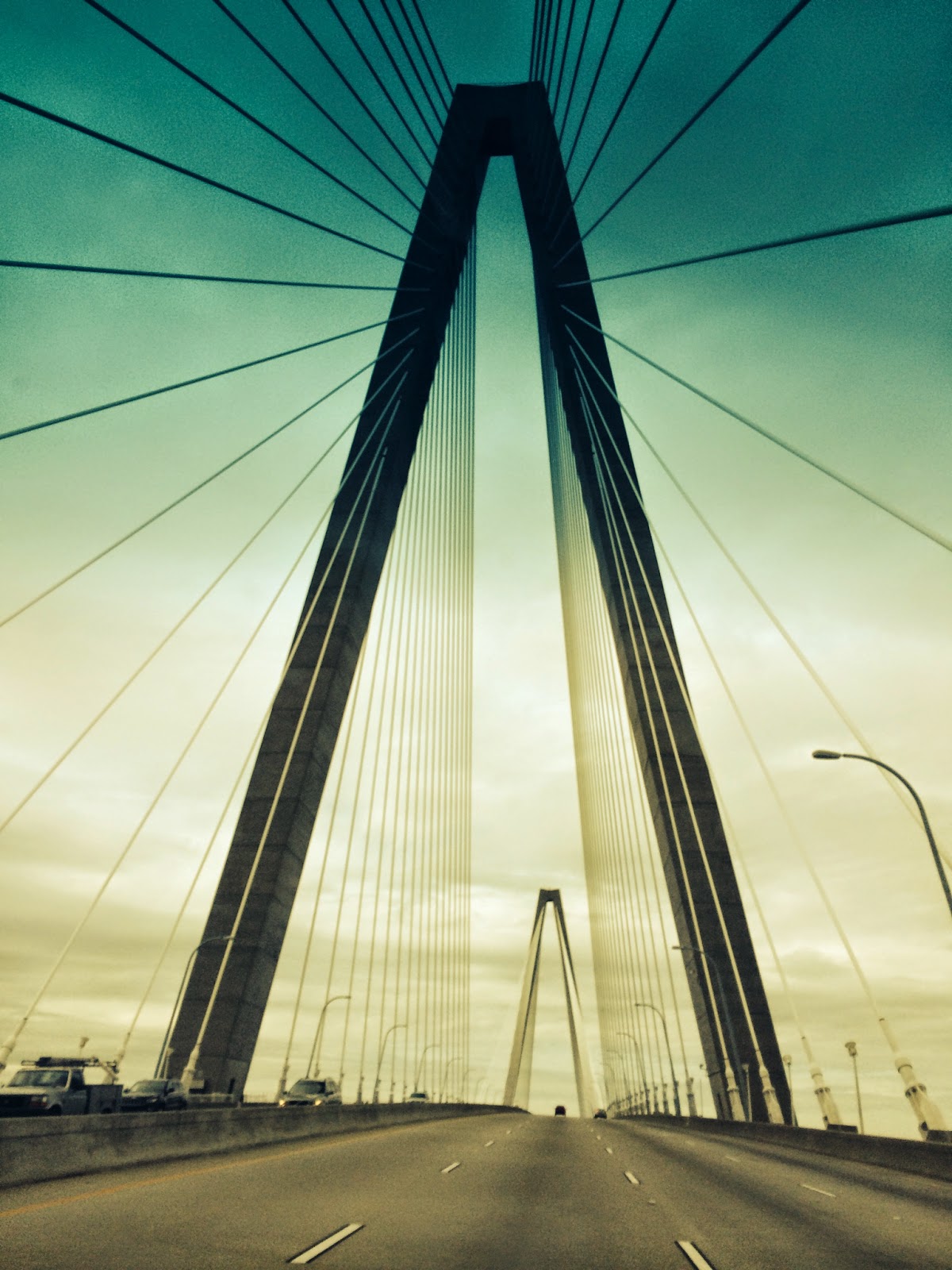 This wasn't really planned, but we were headed from Charleston to North Carolina and it looked like a fun detour to drive over the bridge. Once we were over, Jay thought we should see the Atlantic because our children either don't remember it or haven't ever done so. It wound up being one of my favorite activities.
We literally just drove around until we found a place to park near a public beach access point. We ran down this wonderful boardwalk, past a sign that said to watch out for coyotes, and down to the beach. 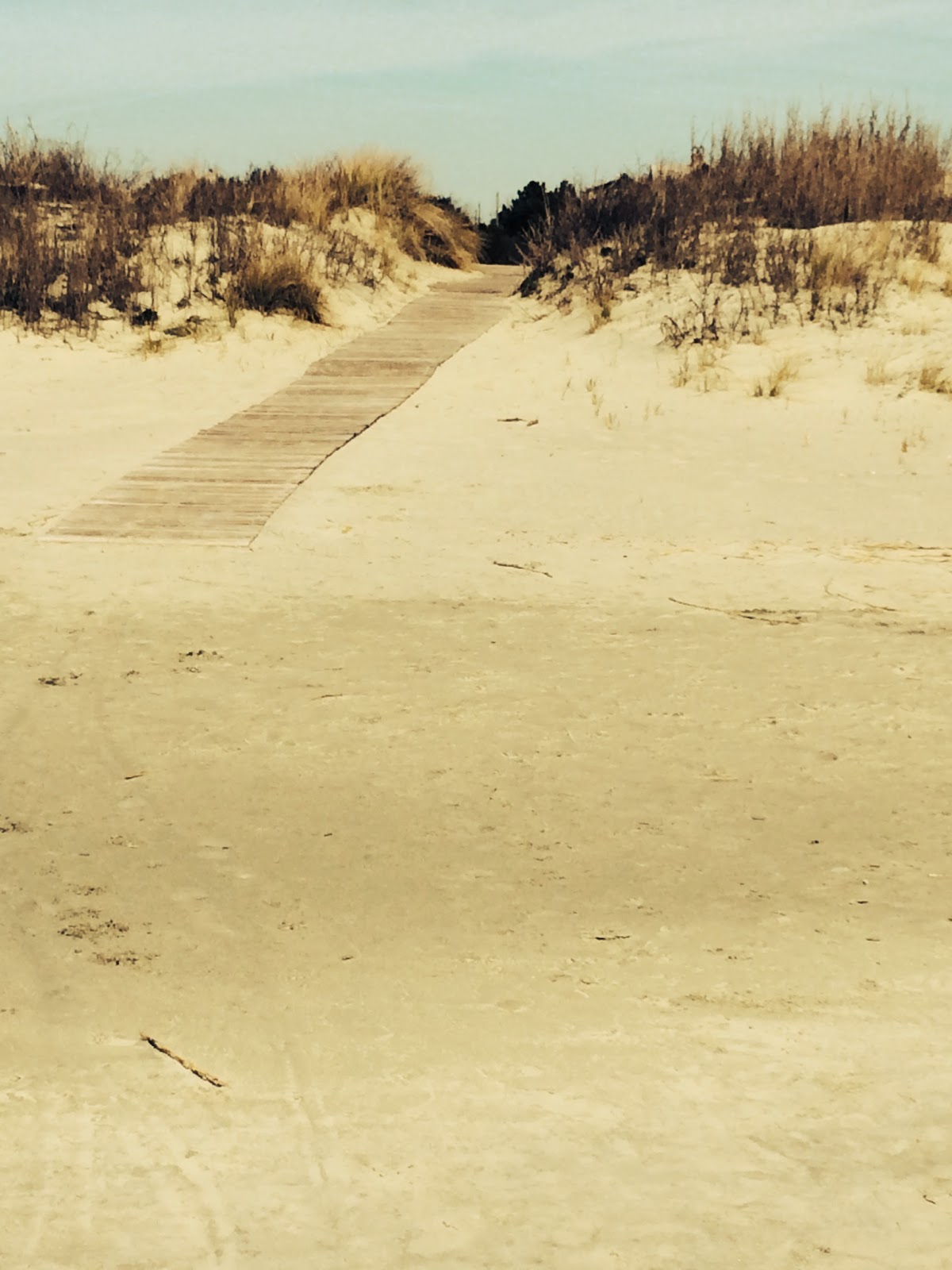 The path was surrounded by marsh and grasses and it looked like a secret passage to the sea. I'm sure it's a totally different world in the summer, but in February it was like we had our own personal ocean. Definitely worth the detour.

Here is where we totally short-changed North Carolina. I really love North Carolina. Jay and I lived there for a year and there are many places worth seeing. Asheville, the Outer Banks, and the universities near Raleigh-Durham (University of North Carolina, North Carolina State University, Duke, and Wake Forrest) are all fun. Unfortunately, they were all getting snow and crazy weather, too.

We also were kind of run down from the terrible barfing of earlier in the week and we spent an extra couple of hours on the highway due to a horrific fatal accident that we passed on the way. It resulted in an RV on its roof with a car resting on top of it. I've never seen anything like it.

All that to say, we chose to go to Charlotte, North Carolina because it is close to Charleston and about 3 1/2  hours from our house. We also assume that we will spend the night in North Carolina during other trips to places further away. That turned out to be a good decision because another kid started barfing in the hotel room that night.

But before the barf, we went to the NASCAR Hall of Fame. 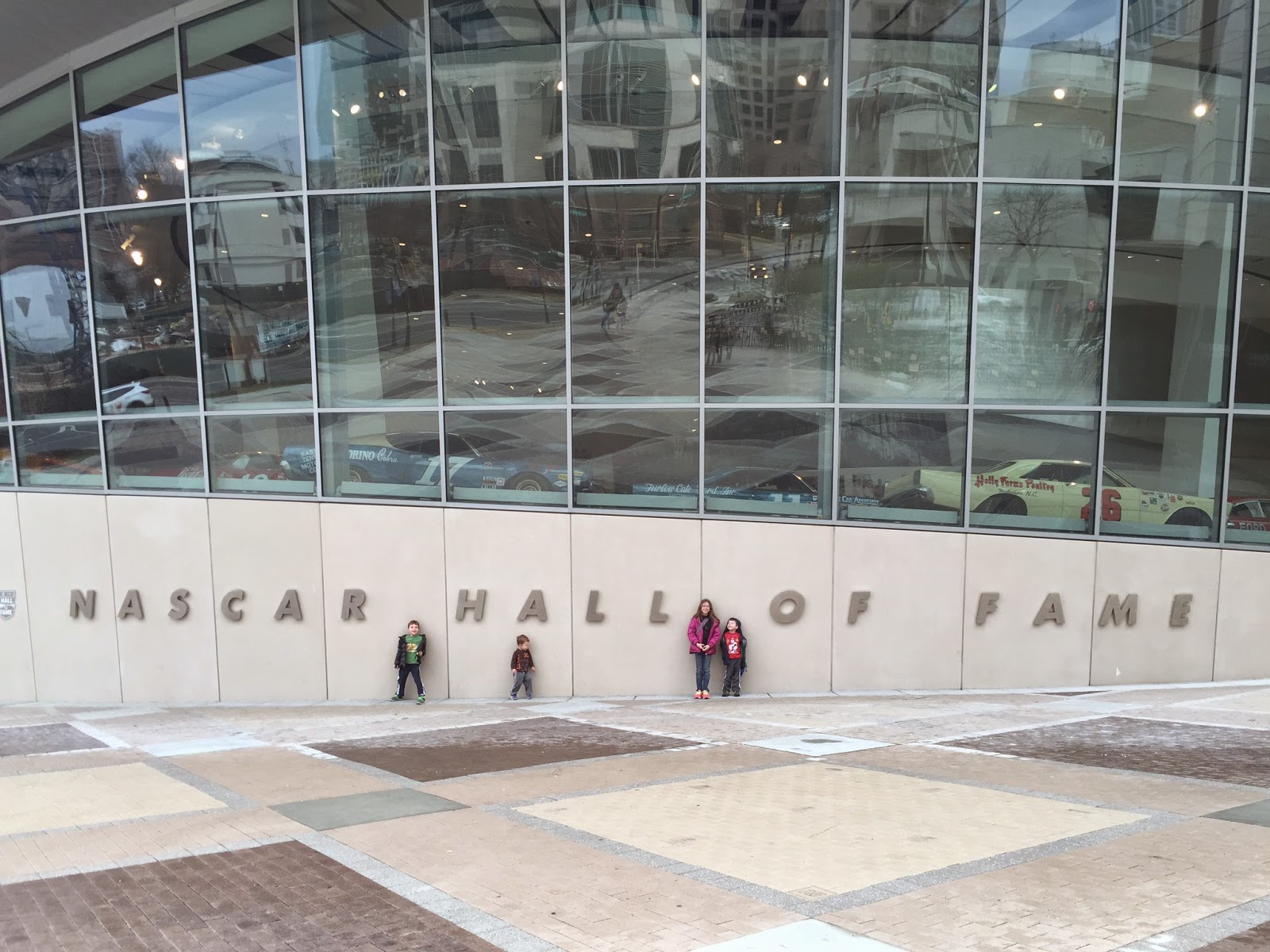 Full Disclosure: I am not actually a NASCAR fan. Growing up in the South, you kind of can't help but hear about races or big names in the sport, but I was totally surprised when my college roommate from Delaware told me her brothers were huge NASCAR fans. I learned that auto racing is actually quite a popular sport, beating out basketball at both the professional and collegiate level for "favorite sport" among Americans for the past several years.

We decided that a giant NASCAR museum was certainly unique to North Carolina and something that might be fun for the kids. And, honestly, it was a great museum. You get to climb on examples of how the track tilt has changed over the years from flat to over 30 degrees.

We got to sit in a race car and pretend we were in the winner's circle.

And I got a Dale Earnhardt hat because it was awesome. 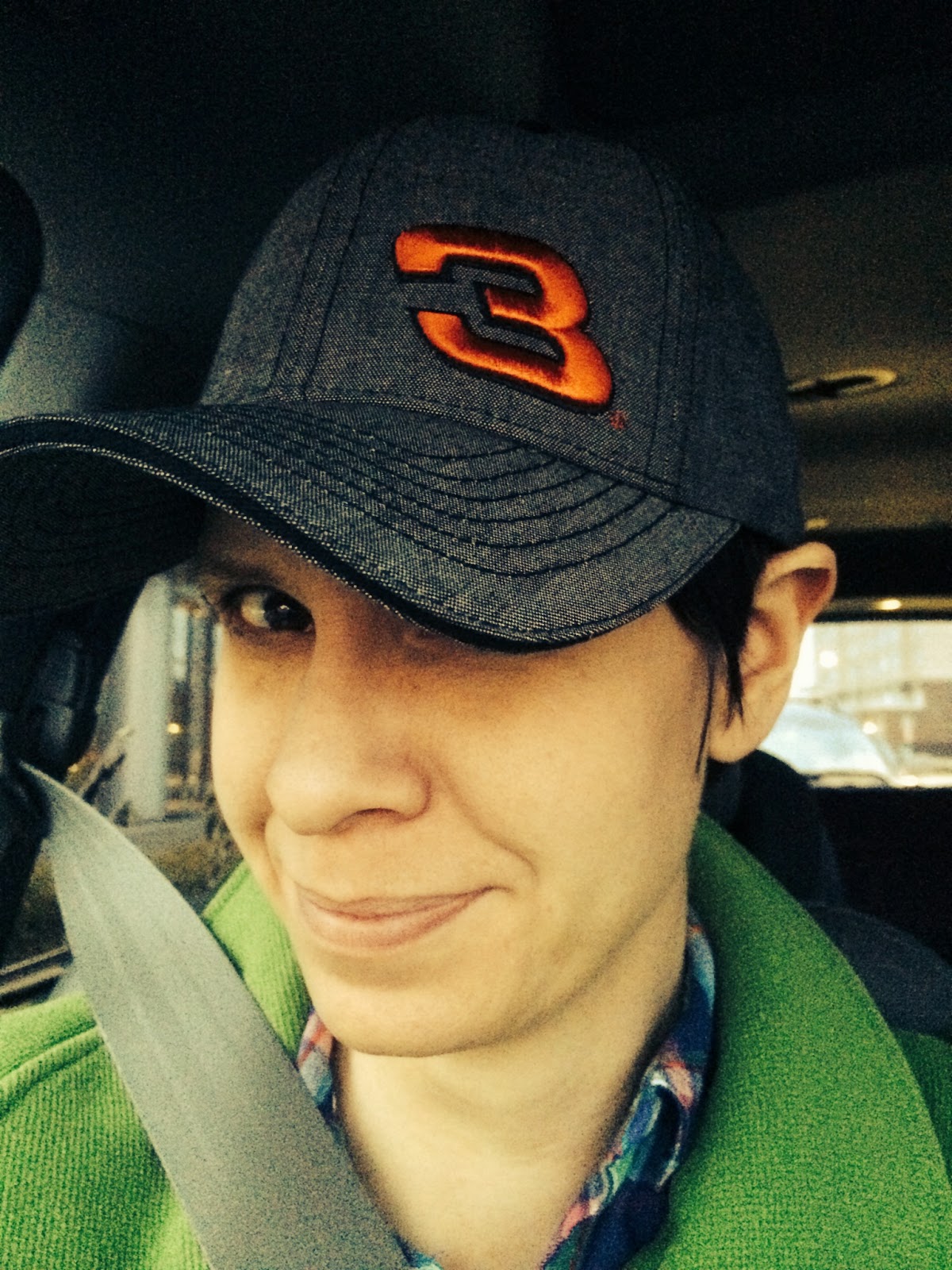 Turns out that the NASCAR Hall of Fame is incredibly kid-friendly. It is already loud and you have to try pretty hard to break a car museum. Plus, there are several interactive video-game-like simulations throughout the whole thing. We finished up our evening with some really great Carolina BBQ, but then regretted that when the barfing began.

The next morning we limped home with a garbage bag in front of the poor sick kid, two new tires on the faithful minivan, and two more states crossed off the list. Next stop: the Mid-Atlantic states.
Posted by Best Mom at 1:26 PM
Email ThisBlogThis!Share to TwitterShare to FacebookShare to Pinterest